He {James Fleming] says he wishes that several wealthy families would come in, found a golf club, etc, and tone up Natchez, the only objections being that property would go up – home property like Melrose – so that those desiring to keep their places would have to pay higher taxes, and get no more than at present, and also some of the population might cripple themselves trying “to keep up” the pace.

I have done nothing but work at papers and accounts since my last letter to you, but today is nice and cool and I may go to Duncan Park to see about the golf course, not having been there yet.

Yesterday I spent the afternoon from a little after four o’clock until nearly twenty minutes of eight o’clock in going all over the golf course with Mr. Hootsel, and he says they will cut the trees anywhere I want and have that golf course. We went over the entire course, just as you and I did, and I will tell you about it when I arrive. He says that he thinks it will be fall before they are ready to lay out the greens, and nobody can play there until about October or November anyway, on account of the heat, so for me to go on my summer trip without worrying, and when I come back there will be a clean sweep of the trees finished and all the stumps removed, ready for me to lay out the greens, etc.

I spent two hours yesterday at Duncan Park, going over the golf course. The trees are being cut out and we will have a very pretty, short links in time.

I rode out to Duncan Park and ran over the golf course with Ed. Henderson. I spent half an hour there with him, showed him the course, think I have a good chance for Carpenter’s [Nathaniel Leslie] support through Ed’s working on him, and also met Mr. R. F. Learned there, and the latter will write to the expert who laid out the new course, and get the maps, if possible, that he carried away with him, as I find I shall have to go back partly to the original plan you suggested, in order to secure nine holes.

I have been busy in the office until I think I shall sleep here, for at seven o’clock I went to a meeting called for the purpose of arousing interest in golf and then home to supper, but felt so restless that I am back in the office again writing you, and will commence on my books in a few minutes.

George Malin Davis Kelly has been requested to supervise the laying out of the links at Duncan Park.

The golf club is about to be organized and they are trying to get me to practically engineer the thing for them, but I will let Jim Smith, Joe Friedler and Ed. Henderson do all the work they want and take all the credit, as I don’t fancy the kind of glory that comes from being president of the club, or etc, when it will take more or less time and I have all I want to do in the singing line anyway. There is such a thing as being drawn into too many things, and I have enough to do now.

Ed. Henderson and I have just returned from a trip to Duncan Park, where I showed Clem Eidt how to make a wooden frame to set up for a teeing ground for the golf course. The golf links are to be a reality, public interest being stirred up by a series of meetings, the first of which I attended, but will dodge the rest. Ed. never goes to meetings and says they are a waste of time, simply talk, talk without doing anything, so we went to the park and actually made a start, even though a small one, and it took only 45 minutes.

I had supper with Ed Henderson and Bill Adams, as we had just made a trip to Duncan Park to inspect the work on the golf links. Ed and I have put down a teeing ground and had the first green cut, and Monday the grass on the first hole course will be cut short, the green levelled [sic] with earth and the cup put in. There is not much to do with the green except fill in a few ruts, where the encampment of the State Militia year-before-last had some tent trenches, and get a decent sod on it. That will require more time than it takes to tell it, but that is the way to go at it, gradually, in my opinion, rather than put up a whole lot of money, throw up bunkers, etc, all at once and try to make a St. Andrews of the course immediately.

Mr. Beltzhoover [Melchior] sent a map of the Sleepy Hollow [New York] grounds, with golf course, which arrived just after I mailed a letter to him the other day, so I will have to write him again and thank him for it.

I think that Ed wants me to start up the golf course as he has spoken to me several times about it.

George M. D. Kelly drove the first golf ball at the dedication in 1920.

George M. D. Kelly reports that membership is now over 50.

Mr. Gillette [Arlington] is back and says the Golf Club will bring a winter resort hotel here!!

Did I tell you that I won first prize, with Dan Grady, in the 4th of July golf tournament, highest class? Fact! Dan called me the other day and handed me an assorted lot of boxes of golf balls - - Standard, Spalding, Wilson, etc, - - and said that he and I were to divide the prize and my share was two golf balls of any $1.00 make. I took two of the Spalding “dimple” balls, with four black dots on them - - “Domino” I think they are called - - as I found they stood as much punishment as any I have played with. So I am about even, never having found the Spalding “Domino” I drove off the first tee, that the children picked up before I could get to it, and having paid 50¢ entrance fee and 40¢ caddy, gotten cups of coffee and used gasoline to the park, for Dan and myself. Dan was almost as much surprised as I over our achievement, though I told him I felt reasonably safe, thinking that it would be well-nigh impossible for anyone else to equal our scores! If I had not secured our entry into Class C we would not have won anything.

Since you don’t approve of the golf paper [Natchez Golf Club stationery] I will use it up as quickly as possible. If I don’t use it in my letters to you, I don’t know when it will be disposed of. I did not like the girl [drawing on stationery] myself. That “thing over her left shoulder” is a sand box and trees in the distance! Its true that she has her bag on the wrong shoulder and that she took out the next club to use too soon and she should have a caddy to carry the clubs, anyway, but I don’t like her hair and I’m not much on golf anyway and this was the best cut that Stietenroth [printer Charles] (that’s the way to spell his name) could get, so all I can say is that he wanted to put some kind of a “design” on the cards, stationery, etc, and if you don’t like this one - - tho’ neither do I - - take comfort by reflecting that you might have seen one of the others! (See attached photo)

The City of Natchez offered free use of the municipal golf links at Duncan Park to the soldiers stationed at Camp Van Dorn near Centerville during World War II.

Herbert Hoover ran the country’s flood relief operations during the 1927 flood, when refugees were camped all over Duncan Park. Hoover was photographed at Duncan Park amid the tents.

*All information and images are part of the Kelly Collection at the Historic Natchez Foundation and Natchez National Historical Park. 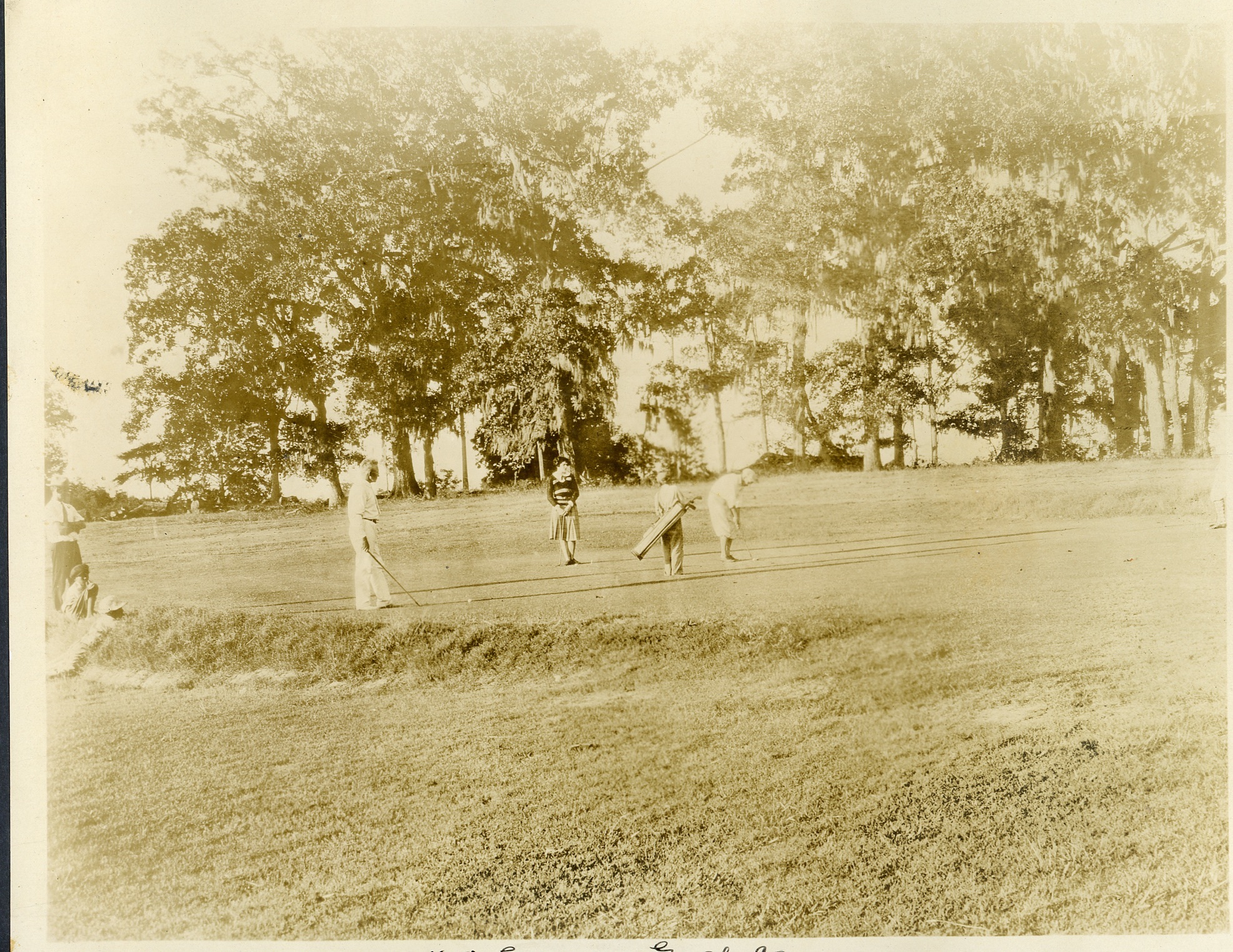 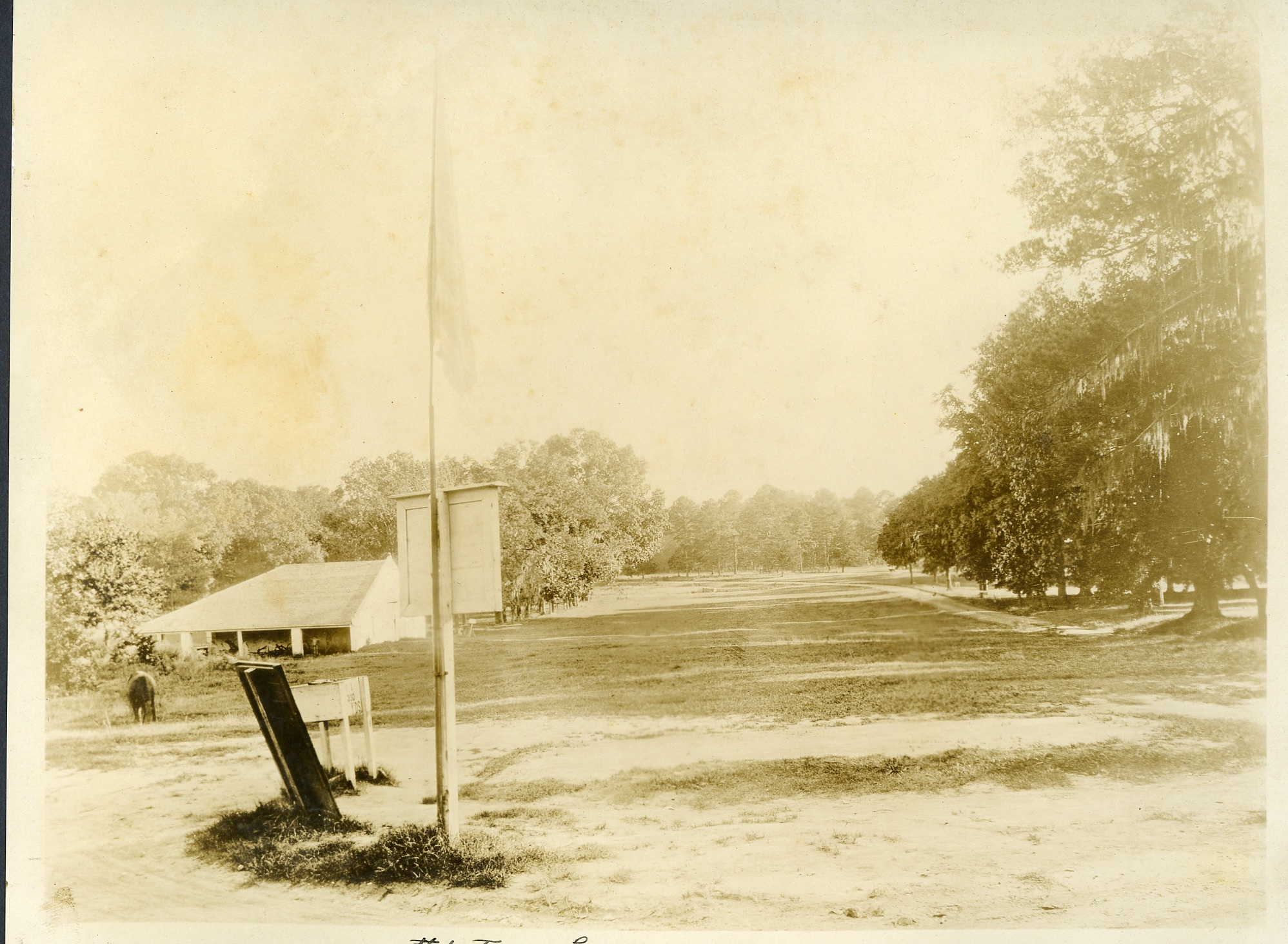 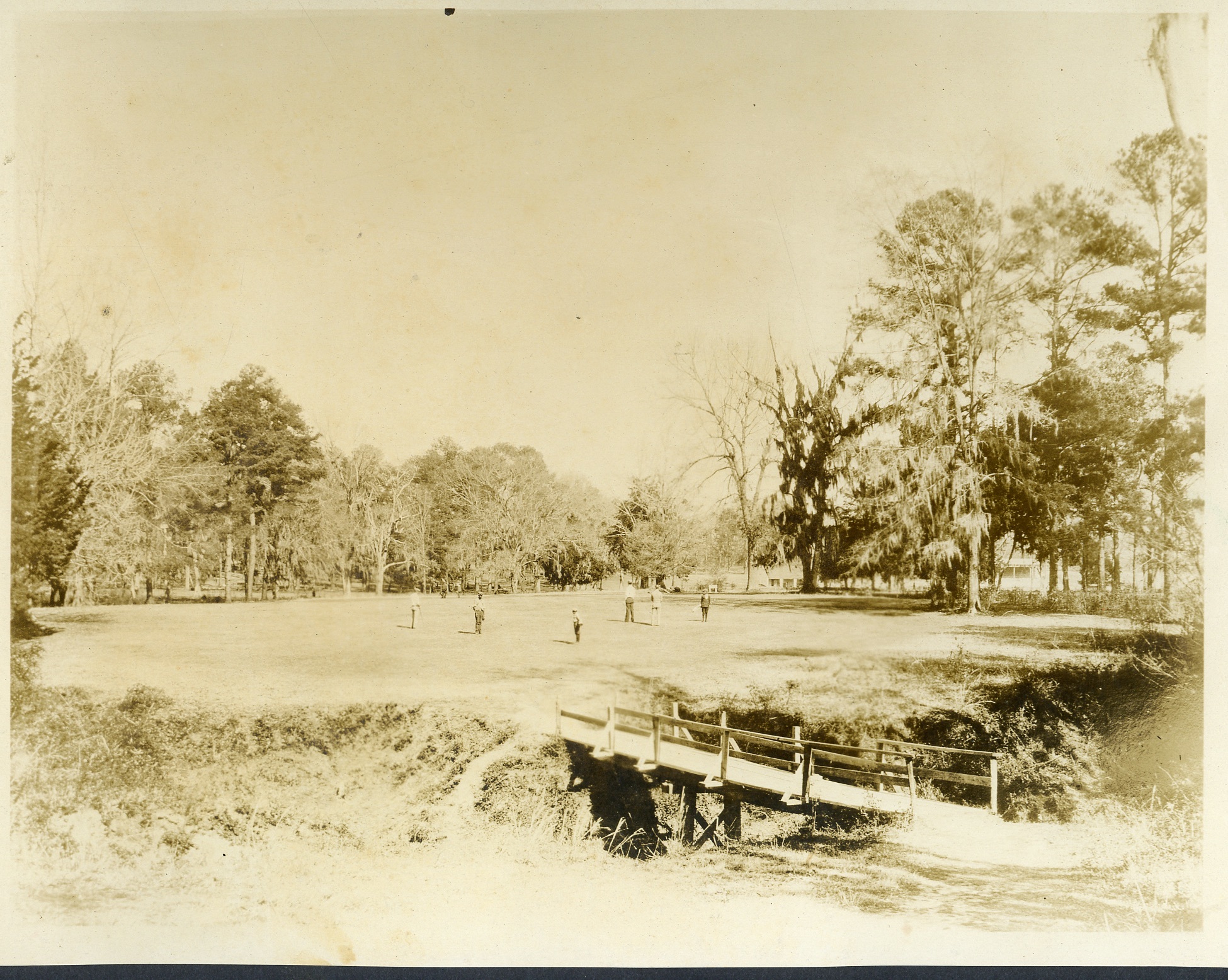 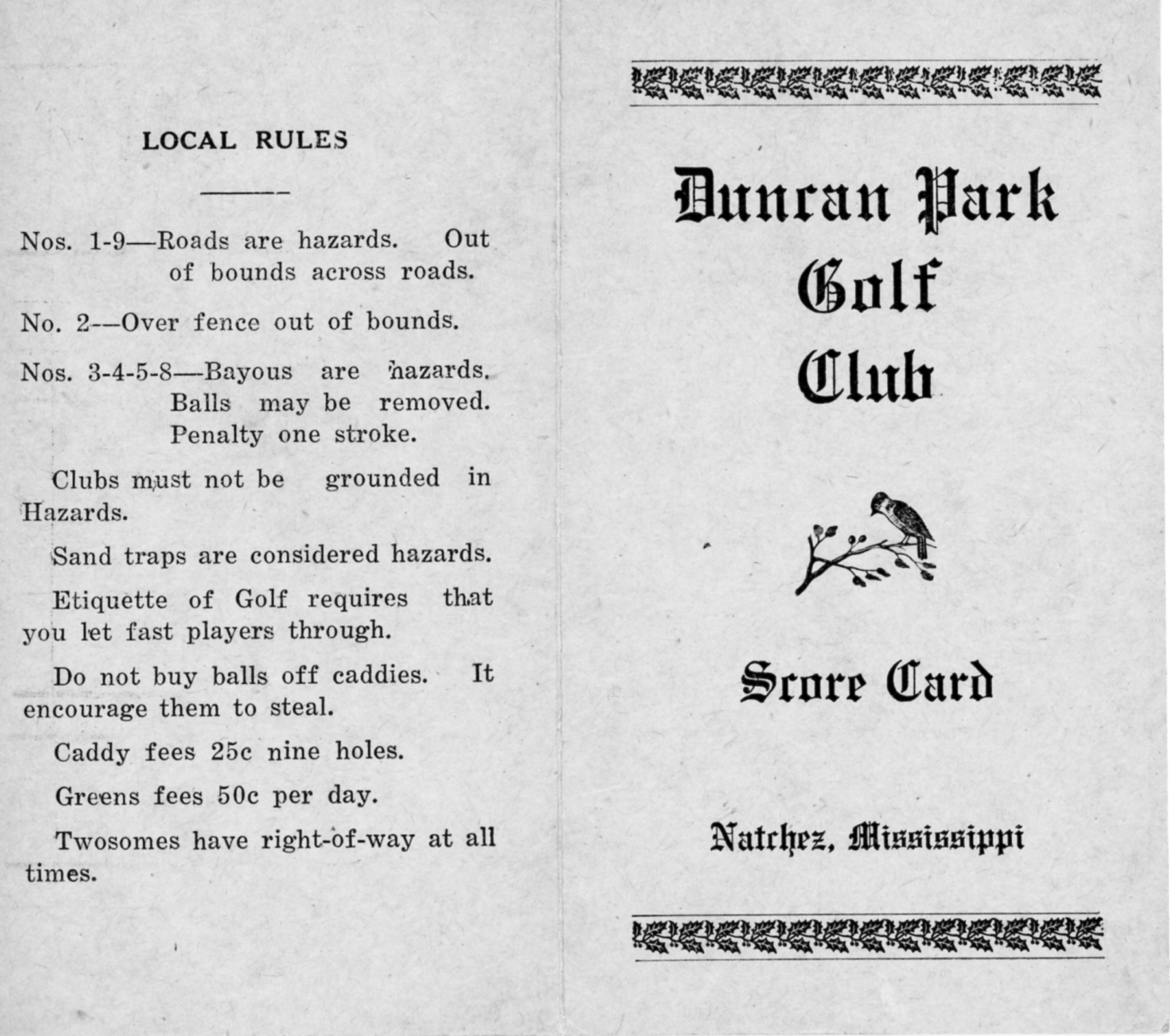 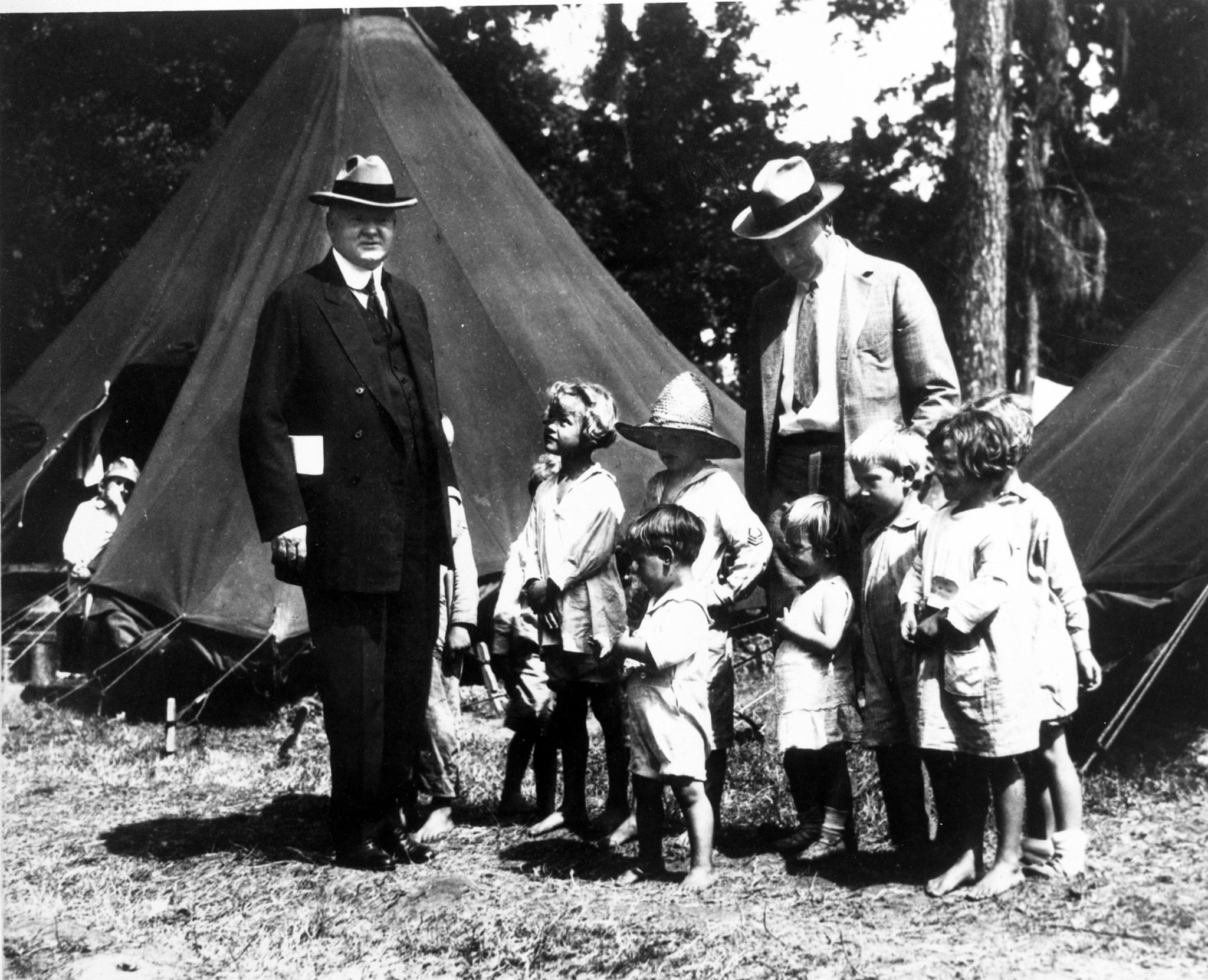