The Prentiss Club caught on fire Labor Day weekend of 2018. Ever since, the Historic Natchez Foundation has worked to restore the exterior of the building and assure its future. The roof has been rebuilt, broken and charred doors and windows have been repaired, and the entire building has been cleaned out and stabilized.

The Prentiss Club is one of the city’s two most architecturally sophisticated and finely finished twentieth-century buildings. Both the Prentiss Cub and its architectural rival, Temple B’nai Israel, were completed in 1905. They were products of a post-Civil War cotton boom and built on the eve of its collapse, signaled by the 1907 appearance of the boll weevil in a cotton field south of Natchez.

In 1895, a group of successful Natchez businessmen, confident in the renewed prosperity of Natchez, organized an elite social club. Its name honored Seargent Smith Prentiss, whose bas relief portrait adorns the façade of the building. The Prentiss Club’s first headquarters was the Casey Mallory House at 403 Franklin Street, where the club celebrated its first birthday on June 16, 1896. In 1898, The Natchez Democrat described the club as the “most exclusive club in the state.” 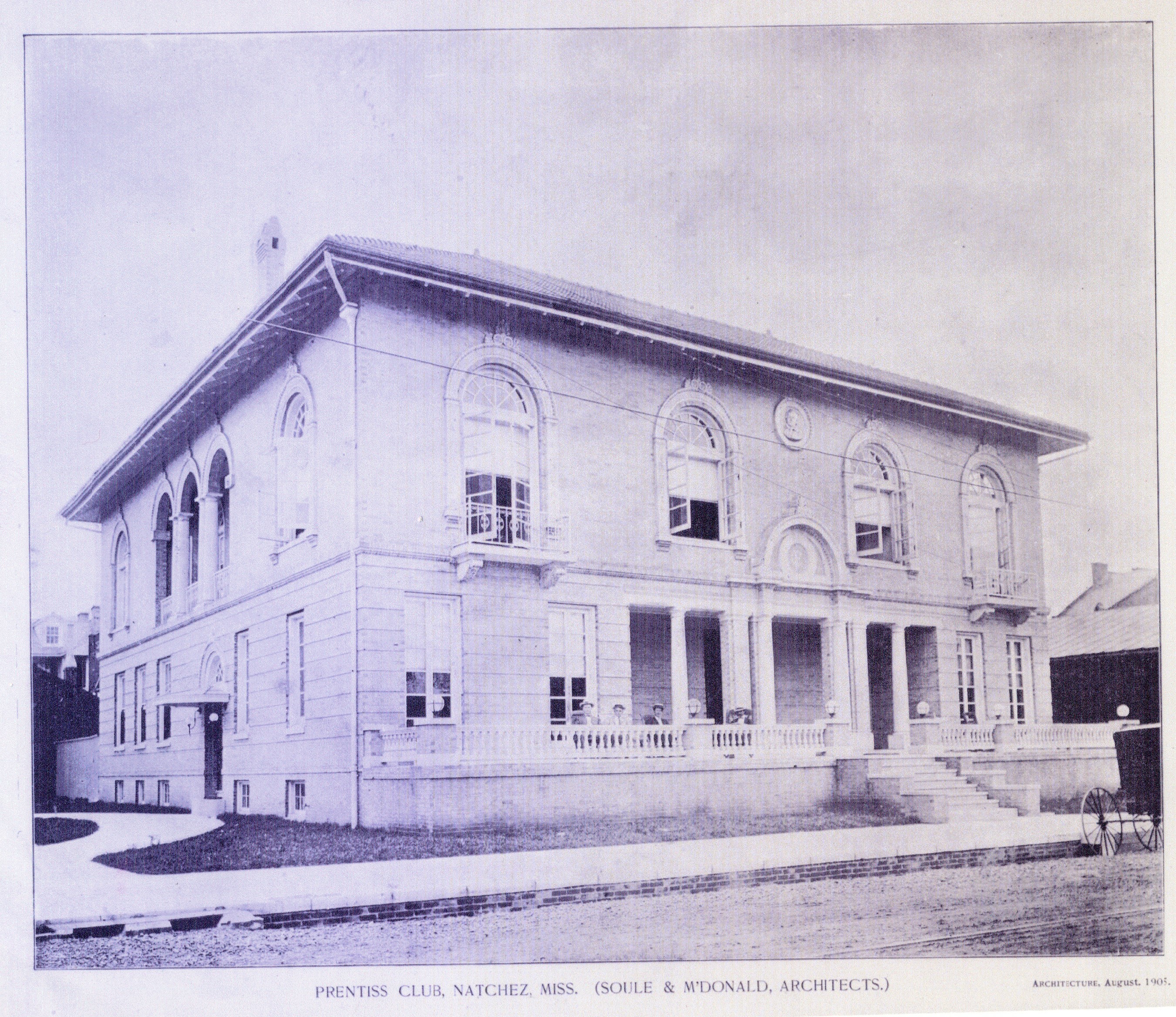 At a meeting on May 19, 1903, chaired by President Israel N. Moses, members of the Prentiss Club voted to build a new club house on the southeast corner of Jefferson and North Pearl Streets at an estimated cost of $25,000. The club then incorporated in June and sold stock to finance construction.

The Prentiss Club solicited architectural plans for its new headquarters and received as many as nine submissions before narrowing the choice to Francis J. MacDonnell (sometimes referenced as McDonald or MacDonald) of the New Orleans firm Soulé and MacDonnell. The firm chose to render the building in the Second Renaissance Revival style, which was popular for private men’s clubs in the Northeast and were still revising the plans as late as March 1904. The club finally awarded the construction contract on May 7 to the Natchez firm of Stietenroth (William) and Dowda (Charles J.) with a scheduled completion date of December 1, 1904.

Construction was completed in May 1905 and the Prentiss Club held a lavish ball on May 23 as a grand opening. The newspaper described the building in great detail. In the basement was a bowling alley, shooting range, and kitchen with a dumbwaiter to the upper stories. The main floor had a parlor, library, ladies parlor, office, and large billiard hall. On the second floor was the grand banquet hall; three small rooms, one each for cards, checkers, and chess; and the grandest ballroom in Natchez with an orchestra balcony and glazed doors opening onto a balcony and balconettes. 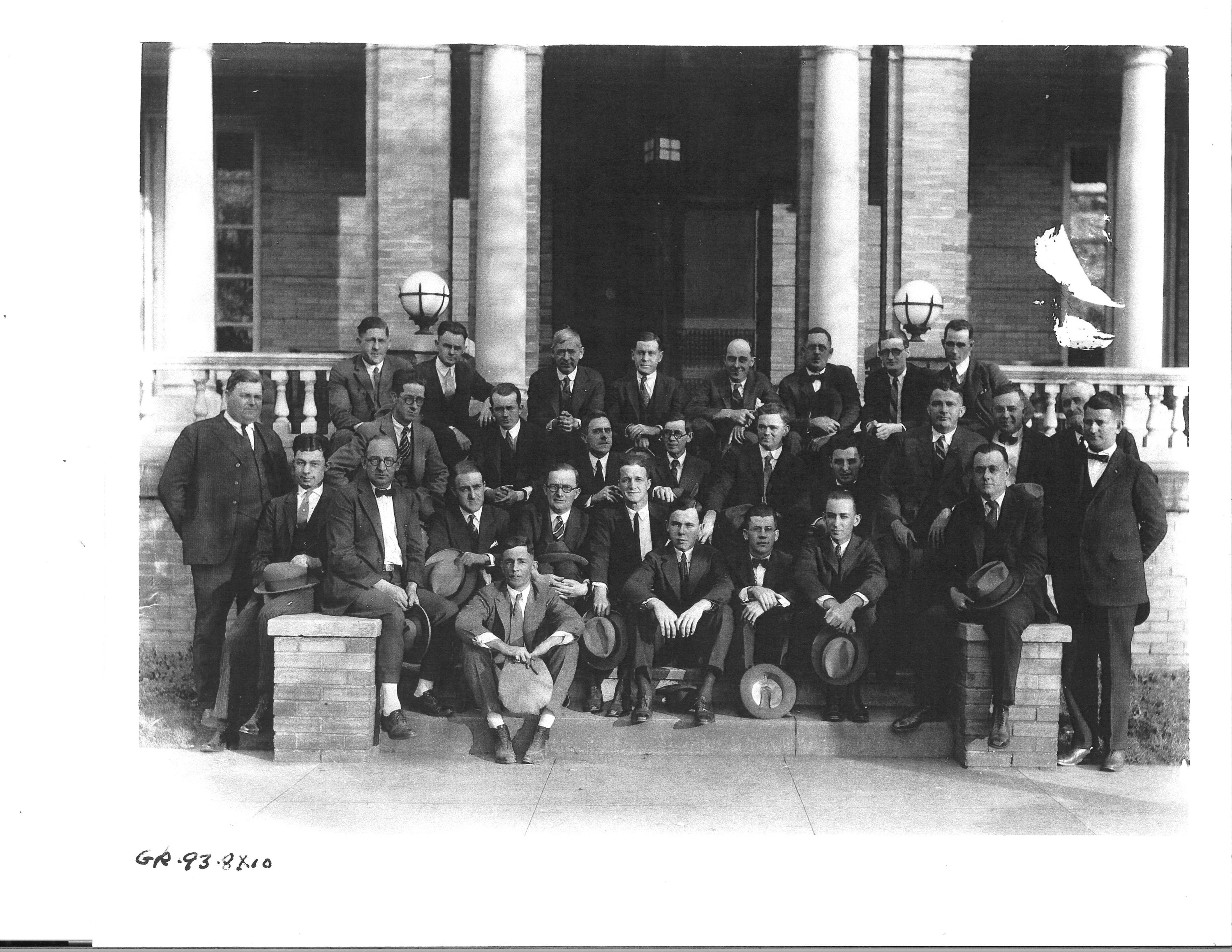 In 1928, the Prentiss Club sold its fine headquarters to a local Masonic lodge and disbanded. In 1973, Deposit Guaranty National Bank acquired the Prentiss Club from the Masonic lodge and soon targeted it for demolition. Local preservationists, who would later become staff and members of the newly organized Historic Natchez Foundation, launched a successful grass roots effort to save the building.

Considered a total loss by its insurers, the owners donated it to the Historic Natchez Foundation, which has stepped forward to restore the exterior of the building and to buy it more time. It has housed an exclusive club, a Masonic lodge, a restaurant, a bar, and special events venue. It will survive to contribute to the city’s economy through new uses, and it will have more stories to tell—stories that will reflect today’s inclusive Natchez and not the exclusivity of the past.

Because of its listing in the National Register of Historic Places, the Prentiss Club is eligible to receive historic tax credits for income producing rehabilitation projects. This joint state and federal tax program includes up to a 45% dollar-for-dollar reduction on income taxes.* Project guidelines include adhering to the Secretary of the Interior Standards for Rehabilitation.