The Ritz Theatre occupies a prominent spot on the block of North Commerce Street between Main and Franklin Streets. The building features an Art Deco marquee and facade. The Historic Natchez Foundation will donate the building to a new owner with a feasible plan for the building. The ability to utilize Historic Tax Credits in its rehabilitation makes the Ritz an ideal candidate for redevelopment.

The Ritz Theatre was built in 1935 for Louis Fry of Natchez and Laz Abraham of Port Gibson. The contractor was Thomas Graves. The architect was identified only as “one of the leading architectural firms of New Orleans.” Fry and Abraham purchased the property in September 1935, and The Ritz held its grand opening on Monday, December 30th of the same year.

When Louis Fry and Laz Abraham acquired the site of The Ritz, they purchased a two-story, brick commercial building that was originally a portion of the commercial complex known as the Gastrell Block, which was built in 1869 and included also the series of storefront on the south side of Franklin Street between North Commerce and Locust Alley. The building had formerly been occupied by two stores—Woolworth’s and Field’s. Woolworth’s was a chain variety store and Field’s was a retail clothing and dry goods store.

Fry and Abraham gutted the original building and created a motion picture theater that opened in December 1935 and was soon sold to the Natchez Amusement Enterprise Corporation in September 1936. Included in the sale were “Approximately seven hundred (700) theatre chairs…Theatre curtains and screens.and nine (9) gas heaters.”

In 1940, The Ritz was sold to the Saenger Realty Corporation, an offshoot of the Saenger Amusement Company, founded in 1911 by brothers Abe and Julian Saenger of Shreveport. During the peak of its expansion, the Saenger Amusement Company was involved in more than 320 movie theaters in twelve southern states, as well as Cuba, Jamaica, Panama, and Costa Rico. Photographs dating to ca. 1940 document that the marquee was changed from a modest canopy with a few strips of neon, to a backlit marquee in the Art Moderne style with “RITZ” emblazoned in neon lights up the entire height of the façade. In 1950, Paramount Gulf Theatres, successor to the Saenger Realty Company, sold The Ritz to Jerry Oberlin, who subsequently sold it to Irving Oberlin in 1953. The Ritz ceased to operate as a movie theater in the 1960s and was used only for storage during the last three decades of the twentieth century. The Oberlin family invested little or no money in its preservation for almost forty years.

About 2000, the entire roof structure of The Ritz collapsed. When neighboring property owners began to complain about the condition of the building and its threat to adjacent historic properties, the City of Natchez began to demand that the Oberlin family stabilize and clean out the property or demolish it. In December 2002, David Paradise and Burk Baker succeeded in purchasing The Ritz and immediately donated it to the Historic Natchez Foundation.

The Ritz theater consists today of four walls with a deteriorated, but largely intact, historically significant façade with trapezoidal marquee. The exterior walls of The Ritz, which are two stories in height, originally enclosed approximately 6,385 square feet of first-story space that included an entrance loggia; shallow entrance lobby flanked by restrooms, and a theater with stage. The building also featured an upper story concession area, projection room, and balcony. The theater had 700 theater seats with an R in the end panels. The Saenger Amusement Corporation enlarged the balcony and added more theater chairs with an S in the end panel to create seating for about 800.

Providing any cost estimates to complete the building without a detailed development plan is not feasible. Decisions need to be made about its ultimate use and whether or not it would 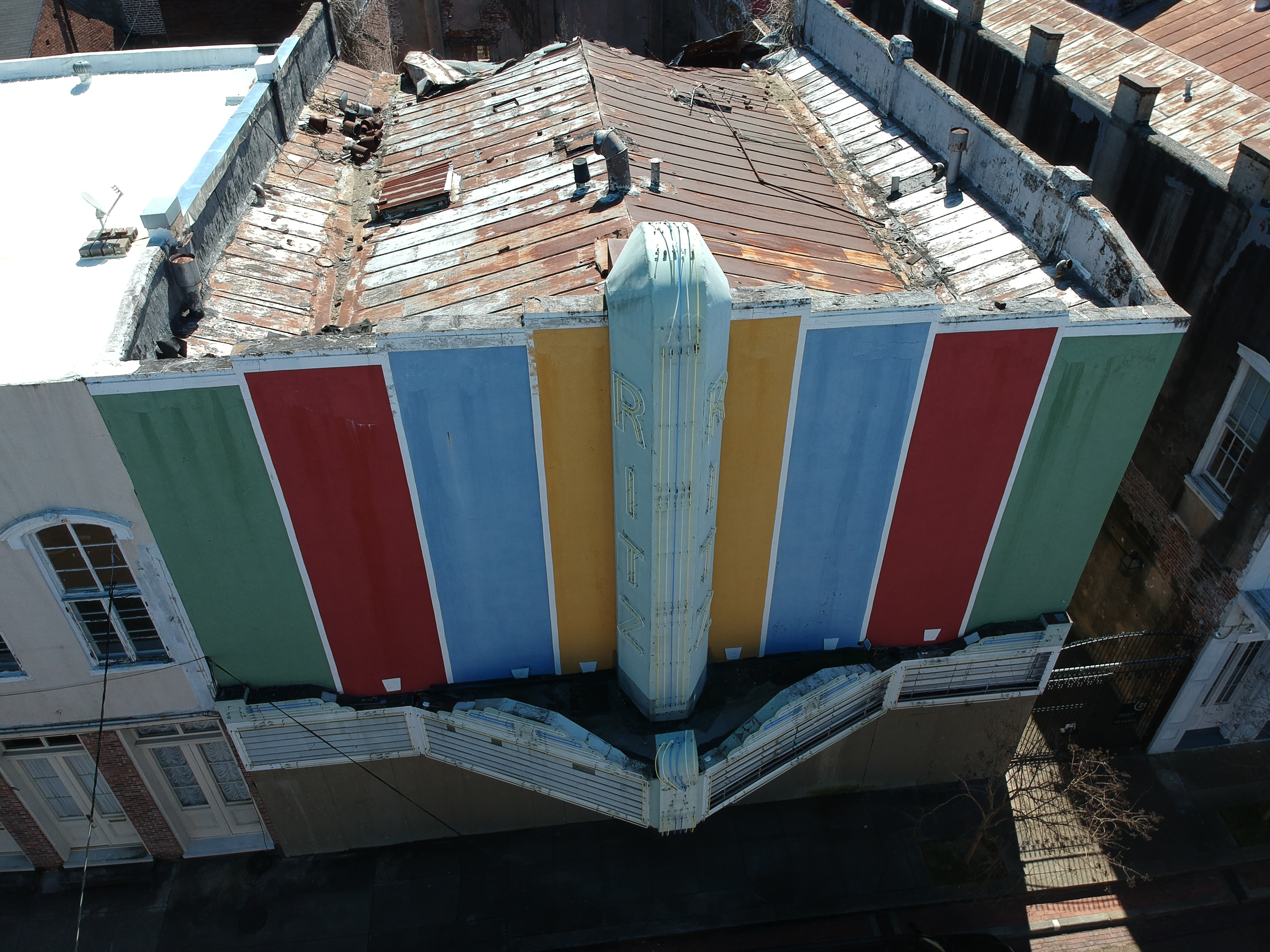 The federal Historic Rehabilitation Tax Credits provide a 20% tax credit and the State of Mississippi offers a 25% tax credit for the qualified rehabilitation of a historic structure individually listed in the National Register of Historic Places or certified as a contributing building in a National Register district. These credits can be combined to offer tax credits of 45% of construction costs. The Historic Natchez Foundation will donate its time and proven expertise in preparing the tax credit applications for the developer.

The Historic Natchez Foundation’s willingness to donate the property to a potential developer is also a plus over new construction, because almost every dollar spent will be subject to the rehabilitation tax credits. which are not available for costs related to acquisition. The building is available at no cost for a developer that can provide a viable plan for the rehabilitation and demonstrate.